Steak of the Art

by TotallyTreating on April 28, 2015 in Bar, Bristol, Restaurant • 0 Comments

I have been hoarding a few Bristol hotspots, to write a single article on the city that I frequent now and then for work. But after a particularly delicious evening the other week I have decided just to share what I have and do a guide later!

After a long work day I agreed to meet colleagues for dinner at Steak of the Art in the quaint Harbourside area which is in the centre of Bristol. It was recommended by the lovely Pip, who is a lover of all things fine and delicious like myself, especially red meat! The exterior is trendy and lit up with some bright blue lights, I have to admit I walked past it before realising via google maps that this must be place, since I couldn’t see the sign until I was almost inside! 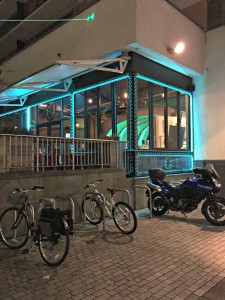 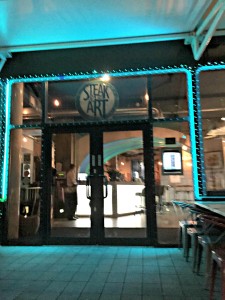 As I got there first, I propped myself at the bar to enjoy an aperitif. I was already impressed by the super friendly staff, and I loved the glass that my drink came in – perfect for my flowering tea! 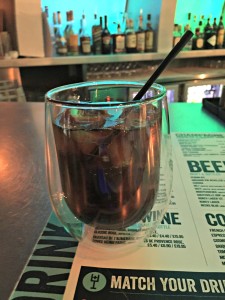 Whilst waiting for said colleagues to arrive, it seemed that I was privy to a glimpse of CSI Bristol as two police officers women donning rubber gloves were giving an un-cleared table the once over just in the front. Exciting for a quiet Tuesday night in the West Country! (I wondered if this might end turn into something like Hot Fuzz!). I tried not to look nosy and studied the romantic sketches on the wall which were for sale (hence the name of the restaurant). 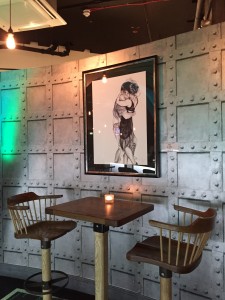 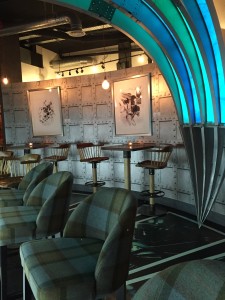 I also totally loved the changing colour wave of light over the bar,which was very relaxing as well as pretty cool and fun: 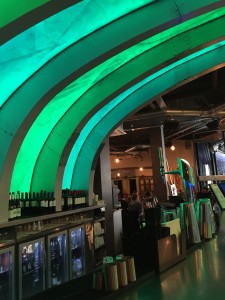 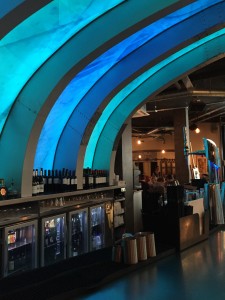 Once we were all together, we were shown to a really awesome booth. The banquettes were branded like playing cards and the table had actual legs. And if you didn’t catch the hints, the fully carved wood alcove we sat in displayed various Alice in wonderland characters – love!! 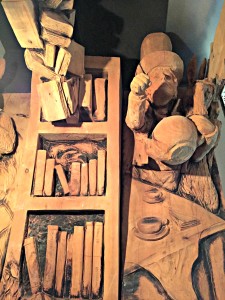 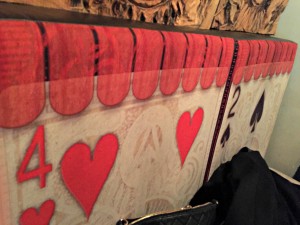 Apparently the booths are themed and created by different artisits. The Alice booth was made by chainsaw artist Simon O’Rourke, and there are others including ‘New York’, ‘Pop Art’ or ‘Bristol Beer Factory’ at this branch (another is in Cardiff).

As we studied the menu – lots of steak options – (surprise!) we asked the waitress about the CSI episode earlier. Apparently a ‘dodgy looking lady’ had come in and forgotten to pay when she left… Upon further inspection, the management realized she had left behind a bag… Containing some drugs! Perhaps payment in kind… I wouldn’t suggest you try that on your visit though!

Since we were starving, we didn’t go for starters but instead dove straight into meaty mains. Angelina and I ordered the ladylike 200g filet steak, medium: 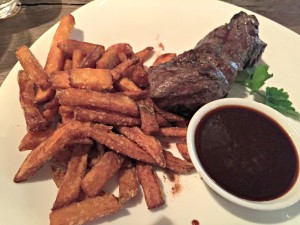 Picasso ordered the ribeye with a ‘featherblade for a fiver’ thrown on for kicks: 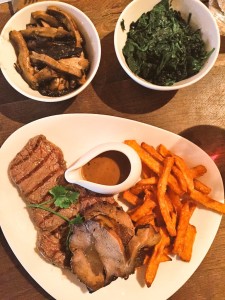 We got some sides to share and a bottle (or two) of Malbec: 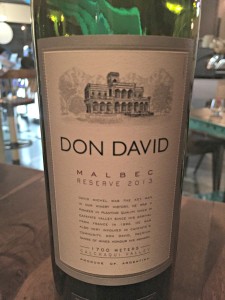 Everything was delicious! The meat had a real flame grilled charcoal flavour from the grill that was so more-ish. The spinach with garlic was super tasty but without the richness you usually get with spinach sides in a steakhouse. Mushrooms were juicy and the sweet potato fries great. My side of SOTA Spicy BBQ sauce was really good too! All the meat (and fish) is sustainably, locally sourced and hung with Himalayan rock salt, maybe this is what gives it its exquisite taste.

After all this, we were still considering dessert – as any polite patron would! Somehow it became a bit of a frenzy with me at first thinking I wasn’t sure what I fancied so may leave it, or could share. Angelina stated a definitive no more policy. Picasso wanted to order desserts and cheese! A first for me (since I’m sure I have a second stomach for sweets) I had to curb his enthusiasm by suggesting perhaps we could try the cheese next time since we surely would be back. Desserts were superb too.

I ordered chocolate mousse on peanut biscuit base with praline and a dollop of ice-cream: 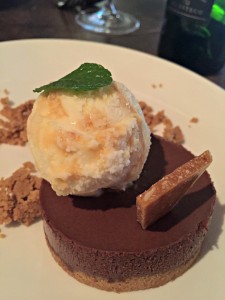 I don’t normally like chocolate mouse but this was so good! Picasso had the creme brûlée with roasted pistachios – 10/10 for sweet tooth satisfaction.

At the end of the evening, we were the last people there and I did slip on the shiny floor on the way back from the Marilyn Monroe suite (lady’s loo) and slide into a graceful yoga pose… I suggest you are careful if in heels (the waitress did say the floor isn’t great for heels – honestly!). All in all, a really good find – we’ll be back!