Naturally as England was out of the running for the cup, I switched to supporting ze Germans with my husband. What a good trade! Watching all the games until the final (Algeria’s madness, France’s blasé style) what a show, I was almost as stressed out as the Germans I was watching with! 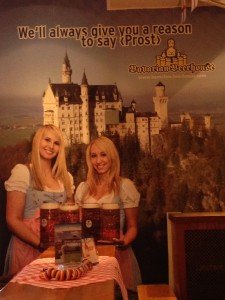 For the world cup final, we went to the Bavarian Beerhouse in Tower Hill. German efficiency – within less than 24 hours after Germany made it through to the final, all the German haunts around the city were fully booked! Heading over for 6pm to get our beer on and meet friends, the place was so perfectly organised – ticket entry only for seated spots – first time I have seen a football game where no one stood up! Compared to Spain’s win two years ago at the Yaeger bar, this was very different! 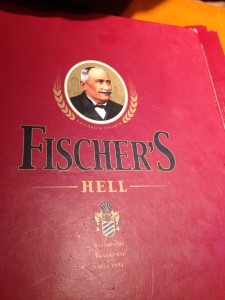 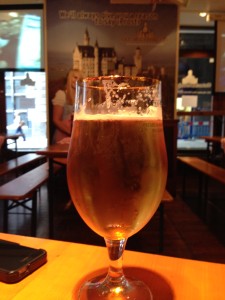 As we prepped our nerves for the big game we ordered some food. A friend got the ma-hoo-sive Jager-Schnitzel (pork escalope with mushroom sauce) 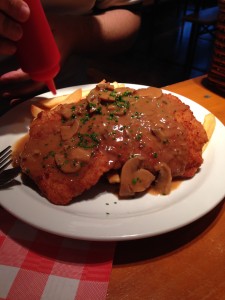 whilst G-unit and I shared the yummy Spaetzle (like baked mac n cheese but better), whilst others went for pretzels with a concoction of warm cream cheese with herbs and stuff (I won’t tell you what it looked like!) 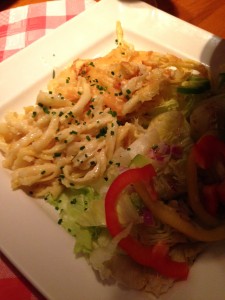 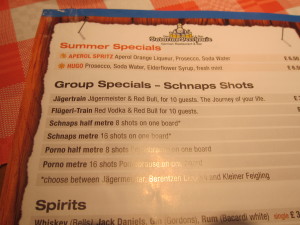 Everyone was dressed in Lederhosen, Deutschland shirts or national colours at the very least to get in the mood. I even got involved with a dress with German flag colours! There were even special hand-made hats by one friends’ German aunty – they looked like rustic tele-tubbies! 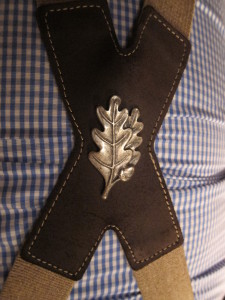 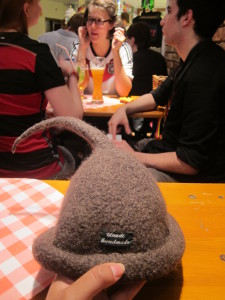 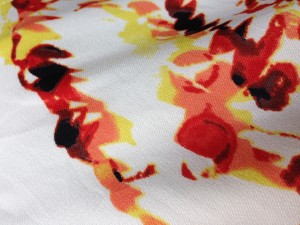 Over the next 2 hours we drank, smoked and drank… waiting for that 1 nil victory!! Everyone was so excited, it was a great atmosphere, free shots on the house, everyone congratulating each other, singing songs, even out on the streets. To celebrate a bit more we went over to the Yaeger Bar and after a 5 min wait we were in. I have to tell you, it was absolute chaos! Mental! Massive, drunk, happy Germans everywhere! (I am 5ft 2″!) The floor was covered with beer – it was a lake! The music was a mix of German Schlaga (apres-ski/ carnival/ eurotrash) and Hip Hop… and I was sober!! Good time I had picked to do a detox! But I embraced it and danced and pranced along until it was time to go home and we had a BLAST! 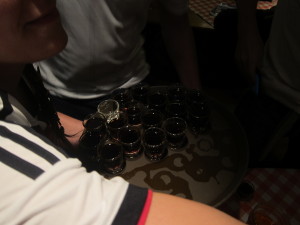 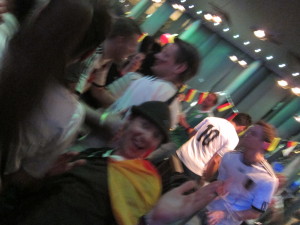 It was an eventful world cup, from the biting and head-butting, to the surprise power teams. I am no footie expert but for sure, the Germans deserved to win, and they sure know how to celebrate a victory!  Even with my stamped on toe that is not letting me wear a shoe right now (god bless the weather), still so pleased for them – Herzlichen Gluckwunch Deutschland! 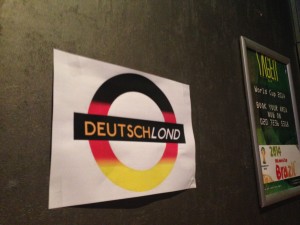